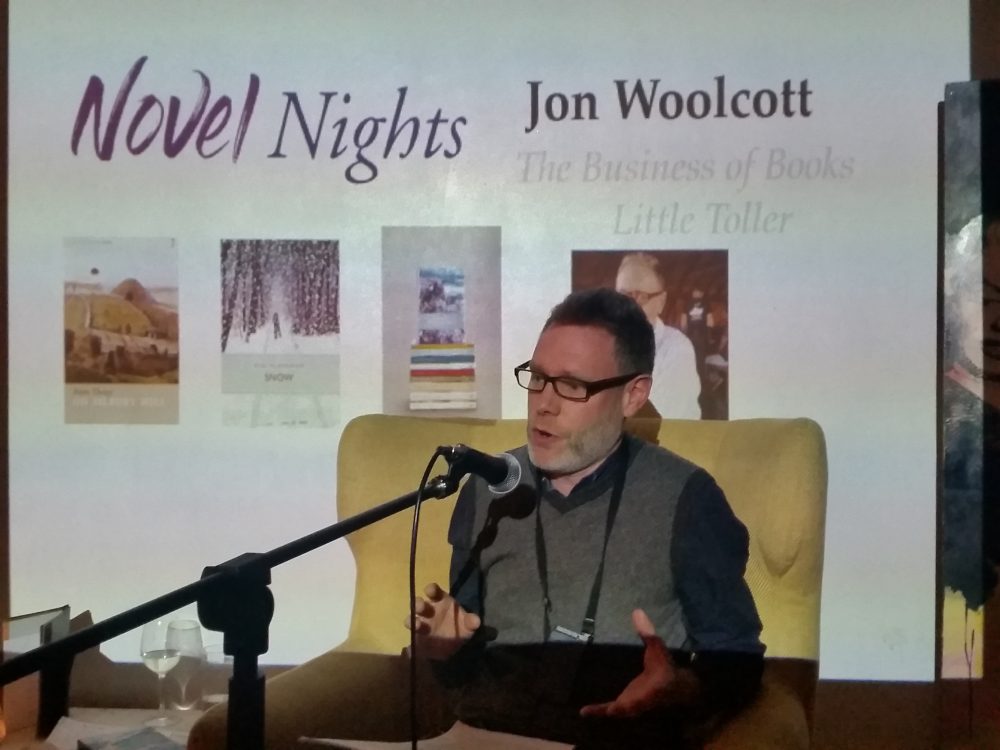 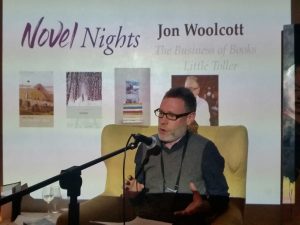 ‘There has been twenty years disruption in the book trade.’ Jon Woolcott’s talk at Novel Nights gave a fascinating insight into the publishing landscape from the scrapping of the net book agreement through to the present day.

Jon has worked in the publishing trade for twenty-five years for the major chains including Waterstones, Stanfords and Ottakers. Roles included bookseller, book buyer and head of marketing. He now works for Little Toller Books, an independent press in Dorset.

The good news was that 2016 marked a turning point in the publishing industry with a rise in the sale of paper books.

But with so many titles published every day bookstores have an ‘embarrassment of riches,’ that creates a problem for book shop managers and book chains. Larger bookshops may carry as many as twenty thousand different titles. So how do they deal with all this stuff?

As Jon pointed out the primary priority for a bookshop is staying solvent. So, if they prominently display best-sellers like Grisham and David Walliams in the front of the shop that’s because those titles will help pay the bills and allows booksellers to stock a wider range.

The net book agreement was originally set up to protect independent booksellers and it meant that no new book could be sold for less than the printed price. When the agreement was abolished larger publishers were able to offer extra discounts on some books with the subsequent ‘race to the bottom based on price.’

And as the book trade is obsessed with the ‘new’ – new debut authors and new titles and with one-third of all sales coming from new titles, the publishers offered discounts on well-known authors.

Then supermarkets started discounting too, though Jon said that although painful for some, it hasn’t been a major threat to most bookshops as supermarkets will, inevitably focus on a few authors and they have limited shelf space.

He argued that the real impact on bookshops and the trade arrived from Amazon. Although the impact from Amazon wasn’t too large when they first entered the book-selling market, they quickly became dominant and a race to the bottom began, with pricing as the only strategy to sell books.

Jon recommends Waterstones, Blackwell’s and Foyles websites if you want to buy online and referenced Waterstones click and collect service.

He urged the audience to promote their favourite bookshops and libraries as they have the power to promote author’s work, recommend your books and champion them (and you).

The Richard and Judy Book club had a huge impact on the book trade too. All at once a book on that list might sell 200,000 copies. Inevitably this influenced commissioning and publishing decisions and so a profusion of titles was aimed at this audience. One of the downsides for bookshops was the scale of influence – it took away their power to recommend.

In response to retailer demands to keep prices low some publishers made books cheap by using poor quality paper and formulaic design.

The next disruptive change to hit publishing was e-books. Combined with the 2009/2010 economic crisis book sales fell off a cliff and indie bookshops were hit particularly hard with hundreds going out of business.

Jon cited Booker winner, Julian Barnes, for his rallying cry for books. Barnes praised book designs and maintained books must be beautiful with a great layout and paper quality. Around this time the race to the bottom for book sales had finally come to an end.

At Novel Nights Jon made a plea for people to buy books from bookshops or small publishers or direct from authors rather than Amazon. The infrastructure of bookshops and the knowledge of booksellers are vital to authors and should be supported.

What are the trends in bookshops?

Curation is becoming increasingly important in bookshops. Serious readers understand the limitations of Kindles or e-books. In recent years the ‘book is back.’ Jon maintained that the landscape is improving now with the major chains such as Waterstones, Foyles and Blackwell’s more stable and Stanfords using dynamic and innovative ways of marketing in the world of Travel. The good news is that independent book shops are again flourishing. He recommended the Bristol Stanfords as well as Mr B’s Emporium and Toppings in Bath.

The benefits of small presses

Jon outlined the benefits of small presses for authors. They have an independent spirit and can take risks and utilise social media in a nimble way. While he cautioned that authors won’t make a million by being published by a small press, they do have more flexibility and Little Toller have a commitment to quality and the aesthetics of the book.

Little Toller was set up ten years ago and started by re-printing nature classics and has since grown its list by asking contemporary writers to explore writing about different places – examples being Ian Sinclair’s Black Apples of Gower, or Sean Lysaght’s Eagle Country. ‘The aesthetic has always  been important to us and we pride ourselves in working with arts who are attuned to the natural world.’

The books on display from the Little Toller stable at Novel Nights were beautifully produced, the cover designs high art and a lively trade in books followed.

In the last section of his extraordinarily informative talk, Jon gave authors tips on how they could engage with publishers and bookshops:

‘Bookshops really matter,’ he said. Booksellers are highly dedicated and as passionate about books as the authors who write them.

While publishers won’t expect you to do the sales and marketing the above suggestions will help them to help you. Jon also said that while some publishers prefer to be the intermediary between an author and a bookshop the trend is for bookshops to have more informal relationships with writers.

A lively Q&A session followed and in response to the question why nature writing has become so popular in recent years Jon said he hoped that ‘it’s not a retreat into the past. Nature writing should be a radical force. Not a looking back nostalgically but a lightning rod to remind us what we are doing to the planet.’

Readers at this event

Polly Roberts read a powerful extract from her novel, Animal. Polly’s description of Walberswick in Suffolk and the life of a sea otter was mesmerising. Her style is poetic, informative and lyrical. Polly read Creative Writing at UEA, followed by an MA at Bath Spa, with Animal earning a distinction on the course.

Andy Morgan shared work from his book on the Touareg rockers, Tinariwen and the Sahara Desert. The writer and photographer managed the group for many years before focusing on journalism and writing. His articles on the crisis in Northern Mali have been published in national press with interviews on national and international TV and Radio. His work brought the heat of the Sahara into the Square Club.

Grace Palmer For the first time in years I read at Novel Nights, as I usually prefer to showcase other writers, but my extract fitted the evening. The extract from my piece about a woman returning to the Staffordshire field and landscape she loved as a child was well received, especially the buzzard noises! My novel, Cathy’s Field, is my second novel and is nearing completion.

The blogger: Grace Palmer recently graduated with an MA in Creative Writing from Bath Spa Uni and runs Novel Nights. Her long-list credits include the 2017 Bristol Short Story Prize and the 2018 Tongues and Grooves Prose Poetry Award. She seeks representation for her novels, The Wish Bone and Cathy’s Field.

Footnote: Further information on the net book agreement and how it affected author’s incomes can be found in the following articles: The Guardian by Sam Jordison published 2010 https://www.theguardian.com/books/booksblog/2010/jun/17/net-book-agreement-publishing  and