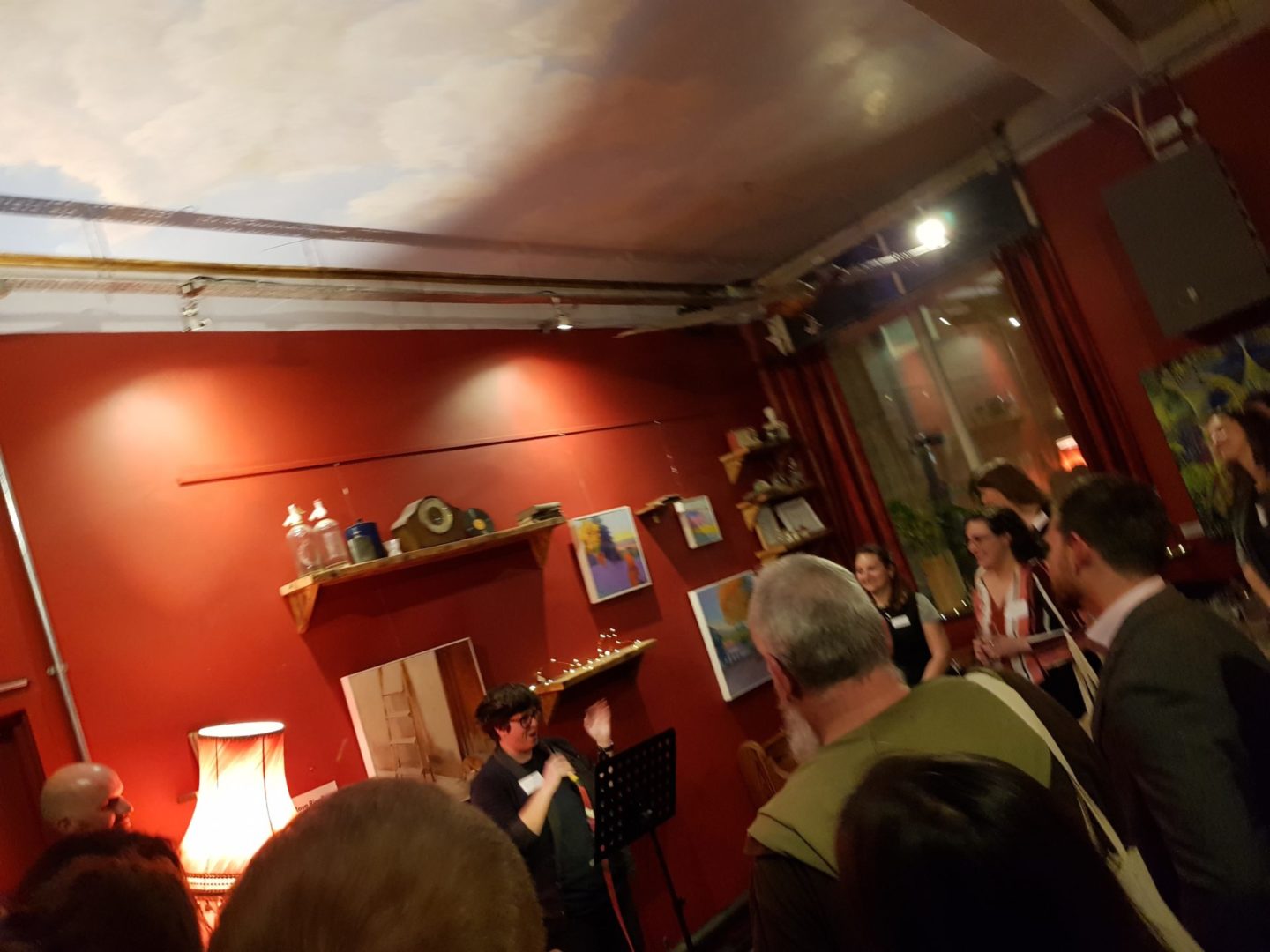 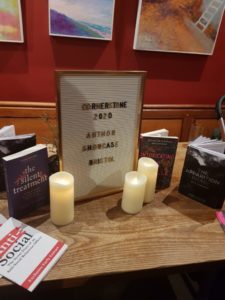 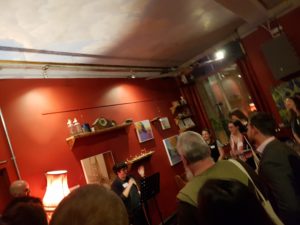 A hot crowded room in the Tobacco Factory in Bristol. A table stacked with novels with a cosy alter-candle arrangement and behind them, Penguin tote bags. Crowds of people, mostly women, packed so tight it was hard to break into conversations to say hello or who are you? This was networking without navigation. My tactic was to grab a drink and sidle up to people who, like me, were alone.  Bingo – I met an academic from the University of Exeter – who wanted to hear about Novel Nights and chat about Exeter’s literary city status. Bingo, I met the Sales Director of Penguin Random House, (or maybe a sales director?)  The publicists were floating in the background, which seemed a waste to me, smiling and serving drinks and food, hanging up coats, instead of chatting to the invited guests, but then they did outnumber the authors by 2:1.

This is how modern publishing is evolving. Penguin Random House had organised a roadshow taking five authors they’re publishing in 2020 to Edinburgh, Manchester and Bristol. Labelled #Cornerstones2020, the event is set up as a networking session followed by each author taking three minutes (three minutes!) to pitch themselves and their book to the room.  Bristol was the last leg of the journey and I’m surprised the novelists were still perky as they spoke to bookshop owners, book buyers, bloggers and event organisers.

It wasn’t till quite late in the event that I discovered that the press pack was inside the tote bag, which helped work out who was who. Meanwhile, I stocked up with books  and booklet-extracts from the novels due to be published later on in the year. The bloggers, so vital to the publishing economy, were out in force and it was good to see Jackie Law from Follow the Hens again. Pete Sutton from Bristol Festival of Literature was another friendly face.

The authors were Neil Blackmore, Abbie Greaves, Will Maclean, Andrew Hunter Murray, Nick Pettigrew and Eley Williams. Each author was introduced and given a short space to pitch at the mic. Note to self. If / when I get the opportunity to talk about my own novel I must mention the title of my book at the end of my three minutes as well as being witty, funny, engaging, etcetera etcetera, as even within three minutes it was hard to remember the name of their novel. The authors happened to have the sort of jobs I used to find intimidating as a working-class introvert. Their day jobs were: stand up comedian, TV scriptwriter for BBC QI, literary agent assistant, university lecturer and another scriptwriter. Where were the people with normal jobs? There was one, an anti-social behaviour officer who has written a memoir, though he’s also a comedian with twenty thousand followers. I thought of the writers I know from Novel Nights and couldn’t see them represented in that room.

As the crowds withered I found out that Penguin is keen to get outside of the London bubble. Brexit was mentioned. They never imagined anyone would vote to leave. Was the company out of touch? Were they too London-centric? With Hachette setting up in Manchester, it was time to conquer the north, or something similar, and so the roadshow was born. It’s great that they are reaching out to cities outside London and everyone will benefit – readers, authors and event organisers. Being able to speak to authors behind the books is important. They are the stars. Cornerstones, I discovered, is an imprint of Random House. As an ex-marketing comms person, I do wonder why they branded the imprint at the rather than just Penguin. Is anyone outside publishing aware of imprints or buys books based on them, but as this was aimed at the industry that might be my answer. 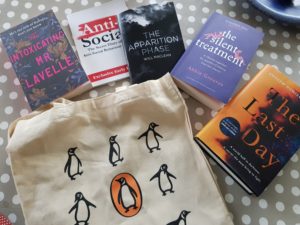 So, let me tell you about the books. The Apparition Phase, written by Will Maclean is out on 15th October 2020.   “Each sentence has to drive the next forward,” he said, “but you know that if you’re a writer.”

Will loves ghost stories and I managed to impress him with my best ghost story about the time I worked in St Nicolas Church or St Nicks as we called it, with its haunted crypt loo and poltergeist activity in the clock tower.”Oh no, I’m going to be the ghost guy,” he said. Then Charlotte Berger, my Novel Nights cohost found us and shared all of her ghost stories. Poor Will.

Intrigued by anyone writing a modern day ghost story I was soon drawn in to Will’s weird world. Damn you, Will, I couldn’t go to sleep until I found out what Janice Tupps was going to do next. The book is confessional-convincing. I was convinced that this was Will’s young self speaking and this was in fact, memoir. Ha! He’d done it, pulled me into a 1970’s narrative dream and left me there in the attic, not able to read on until the book is published on 15th October 2020. Grrr…

The Silent Treatment by Abbie Greaves is out on 2nd April. The idea came from a story in the metro about an 18 year old Japanese boy whose parents had never spoken to each other, ever. In Abbie’s novel  Frank and Maggie, married for 40 years haven’t spoken for six months. The novel untangles why.

Andrew Hunter Murray’s book, The Last Day  is admired by Stephen Fry and Lee Child, according to the blurb. The hardback launches on 6th February and the premise is intriguing. 2059. the world has stopped turning. One half suffers endless night, one half of the world nothing but burning sun. Andrew spoke so eloquently on the platform coming out with lines like, ‘froth bitten North Atlantic,’ that this was the first book I turned to, despite not usually reading dystopian fiction. As I turn to random pages I see lyrical sentences, rhythm, poise, an author who cares about his craft.

Sex; Neil Blackmore warned us that his book had plenty. The Intoxicating Mr Lavelle is Neil’s third novel, set in the 18th Century and on skimming the book I read intimate and tender passages between Horace and Edgar. Set in the eighteenth century, Edgar and Benjamin embark on a grand tour of Europe where their real education begins.

Anti-Social is a memoir about a year in the life of an Anti-Social Behaviour Officer, in diary form. Covering mental health, poverty, crime and community, the reality described in the book is hard hitting as you’d expect in this age of austerity, ‘so, back to today’s corpse.’ The author’s identity is a secret, until he can give up his day job.

Eley Williams’s Attib. and other stories won the James Tait Black Prize, The Republic of Consciousness Prize and was longlisted for the Dylan Thomas Prize. Her PhD supervisor was Andrew Motion and she lectures in creative writing at Royal Holloway, University of London, which gives you a flavour of why you want to follow her work. I’m very much looking forward to reading her debut novel, The Liar’s Dictionary.

While I cannot reveal  any more at this stage I hope to bring a couple of these authors or publishing insiders to your attention on the Novel Nights podcast or at a Novel Nights event.