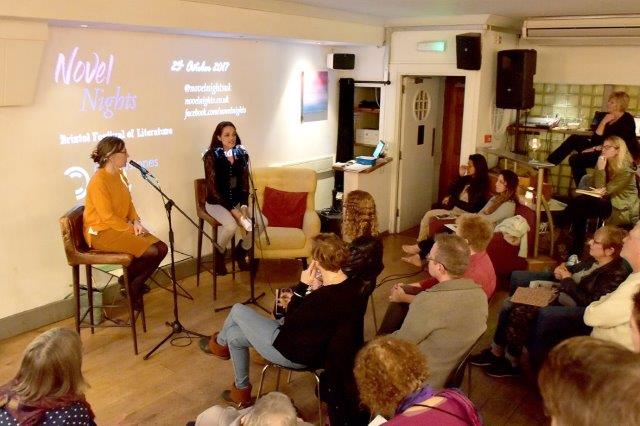 What tips could Dionne McCulloch provide a bunch of writers on self-editing?

The question hung in the air as the audience waited for her guest talk. As part of the Bristol Festival of Literature, Novel Nights hosted Dionne, one of the editors from Cornerstones Literary Consultancy, who started with advice on the critical elements of novel writing before answering questions from the audience. Desperately, I hoped for guidance on how the hell to start a redraft after (finally) reaching the end of the first draft of my first novel.

The Square Club at The Berkeley Hotel was suave. Funky odd shaped chairs to sit on, Impressionist prints on the walls and tea-lights flickered inside Bulldog London Dry Gin black stemmed glasses. It smelled, lightly, of perfume. The nit-natter of people and scraping of bar stalls stopped as Dionne started. She explained Cornerstones’ aim to ‘unlock the story authors are trying to tell’, assisting writers to adapt their work so that a final manuscript is clear, gripping and compelling (which, of course, we all want)!

The captivated audience listened to valuable advice on how to approach structural editing which ‘starts with the character’. Dionne emphasised the most important aspect in fiction and non-fiction storytelling, ‘The protagonist needs to want something really bad.’ Once the something is established whether a person, place, or object then the writer must attach stakes to the object of the protagonist’s desire. If there’s more than one main character there must be a shared desire or theme. Inner conflict must be clear and the protagonist should face obstacles to overcome, but (thankfully for me), Dionne stressed these aspects can be developed after the first draft is complete.

Interestingly, when asked the best way to approach redrafts, Dionne advised going through a manuscript doing passes for each aspect that needs improving. This for me was the most relevant point of the evening. Now I can face a second draft without a quivering chin.

Writers know the publishing world is brutal and snap judgements are made from reading one paragraph. Dionne emphasised the importance of ‘voice’, and how inhabiting a character is critical to writing a good story especially in opening pages, but she also explained the tailored mentoring and detailed reports that core and industry editors at Cornerstones offers its clients in order to polish off manuscripts, cover letters and synopses. Useful, if you have money to spare. Another useful tip was to use writing groups for development and editing advice.

As writers we share the most intricate weavings of our minds, we toss our literary hearts and souls into lines! It feels exposing to have others read our stuff and react. Like our main protagonist, we have desire. We want something, a reaction, hopefully a positive reaction. Towards the end of her talk Dionne enthusiastically advised to ‘persevere’ because it’s a ‘long game’, saying that ‘rejections are honourable’ because it means we’re putting our writing out there. As a budding writer it felt encouraging when Dionne said that an agent doesn’t reject an author, they reject a book and it’s fine to send a different book to the same agent.

At the end of the talk I was excited to return home and take a new tactic to the second draft of my manuscript. Novel Nights never fails to answer my ‘writerly’ questions and re-energise my approach.

Review of readings by Grace Palmer

Every Novel Nights includes a section of readings. This month we had a bumper  twenty-seven writers submitting and choosing three was difficult from the talent out there. Rejection does not mean we did not value other submissions!

Judy Darley, writer and journalist, hosted this part of the evening.  Her blog, www.skylightrain.com  is full of inspiration for writers and dreamers.

Alison Bown’s speculative fiction novel describes a future where nature can only be accessed by the super-rich. The unnamed narrator is a ‘fake amongst fakes,’  and water is the prize commodity in this world. Alison’s extract was rich with menace and her reading ended on a delicious cliff-hanger. Alison is a writer and sound designer, undertaking a PhD in digital writing and computer science.

DM Tomkins’ novel extract featured climate change and the death of the protagonist’s son. ‘The scorch mark never came out. ‘The carpet fibres were crisped and blackened, the shape of the iron pointing south to the Antarctic.’ This ‘telling detail,’ resonated with the audience. Deborah writes long and short fiction around environmental themes & founded Bristol Climate Writers.

Kate Simants had the audience groaning with her description of a  crime scene. Kate has just finished an MA in Crime Fiction at UEA and her prose is outstanding and gripping. ‘Night. Real, dense, outdoors night. Nothing like the safe, half-lit gloom he’s known from a life in the city. Here, the trees all around hold the darkness tight, pressing it in.’

And finally, thanks to our audience for attending and for all the volunteers who make Novel Nights such a success and a hub for writers.