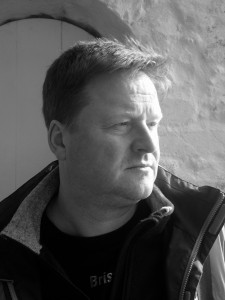 In the first half we heard future-world stories by Simon Toseland, Caroline New, Paddy Edwards and Tim Kindberg.

Caroline’s extract from her novel was in the first person describing the character’s lesbian lover with such tenderness that a collective sigh went around the room as she read. Tim handled language adroitly using the word ‘nom’ in a way that did not trip us up whilst listening; a mark of skill. Paddy’s novel in progress was full of colour and sensuous detail, describing a parade which he explained afterwards was inspired by childhood experiences in India and a fascination with the modern North Korea.

Simon’s piece was an ironic exploration of a future world where women are in charge – ‘I’m going to sell my husband at the market’ being the arresting first line. It was no surprise that Simon is a ghost writer and editor. All the writers held the audience’s attention and that’s a reflection of their writing technique and story-telling.

During the break I caught up with some of the audience – Eugene Lambert, a previous guest speaker had driven down from Stroud ; The Sign of One, the first in a sci-fi YA trilogy  is published  in Spring 2016. He first read at Novel Nights way before he had a publishing deal and it was great to see him.

Thomas David Parker, of Stokes Croft Writers, shared his thoughts on hosting a great event as well as his current writing successes and plans. It was interesting to get feedback on the evening from Bertel Martin. Bertel used to host Word of Mouth at the Thunderbolt with Richard Jones from Tangent Books) and has been working on literary events in Plymouth for a few years. He came to the event for the first time, having heard about us ironically, via word of mouth. There was also cake to celebrate our birthday and in a separate blog post I’ve written about the growth of the writing scene and opportunities for writers in Bristol.

We asked the audience for ideas and feedback and there were some great ideas to consider taking forward such as a Novel Nights competition, a tie-up with the Bridport Prize winners, providing tips from writers and flash fiction.  Helen Sheppard and I are planning the next year’s programme at the moment. It was good to be announce that we are moving to a new home, Strawberry Thief Bar, a more central location. Read more on the venue here.

In the second half of Novel Nights our guest, Gareth L Powell, author of the Macaque series, read a newly commissioned story, Ride the Blue Horse  He took us to other-worlds – two friends in the desert are searching for something useful. Within a sea of shipping crates they find a jerry can of petrol, a Ford Mustang and dried food. Someone’s poignant stash for when the oil runs out. In this world there is no petrol, no cars and they’ve never driven but that doesn’t stop them jumping in the car to try and escape into the desert at the punch-line, leaving us aching for them to succeed.

What struck me about Gareth’s stories was their humanity. Prior to this event I hadn’t warmed to  science fiction and what Iittle I’d read presented me with disturbing projections of the future or a fascination with weaponry and combat which left me indifferent.

Gareth’s characters evoked our compassion and showed their vulnerability. I say characters loosely as in one of his stories he described a creature with numerous hands / feet and faces whom I felt protective towards. Then there was a sad ship and a creature made from a soup of organic material and hardware who eloquently expressed his feelings in a Frankenstein’s dilemma. His ability to move me as a reader is, of course, one that all good writers have, but nevertheless it helped shift my thinking about the possibilities of science-fiction writing. When I asked him what the creative limits or constraints were within the genre and he said there weren’t any. I could feel my writing muscles tensioning.  As my co-host @HelenSheppard7 tweeted later: ‘I’m sci-fi inspired.’

One thing that Gareth doesn’t write is dystopia – ‘I turn on the news and there it is already. We’re living it already.

Themes of family and loyalty were threaded through his work and I wasn’t surprised to hear he’s a Dad, though he described his character, Ack-Ack as his mid-life crisis. Gareth researched simian characteristics before he began the trilogy. In the novel the monkey asks people not to look at him  as apes interpret eye contact as a sign of aggression. Ack-Ack throws shit around as monkeys do when stressed and uses his feet to light his cigar. Whilst reading Hive Monkey the bits I returned to were all about Ack-Ack’s delightfully monkey characteristics such as the description of him ‘grooming his tail’ for example or running across Durdham Downs in Bristol at night. In Ack-Ack, Gareth’s created a believable non-human character with tons of personality. It must have been fun writing and @ackackmacaque has a twitter following of 2K followers. Jealous ? Me?

As for working processes Gareth explained he writes a novel in six  months and has so far written eight novels. This level of professionalism and skill might make novice writers feel daunted but he also said he had days when he sits and stares at the computer, checking twitter (@garethlpowell)  and drinking tea. On a good day he achieves 6,000 words but sometimes just 100  – 200 but he was clear, those 200 words are good ones. I’d heard one of my favourite authors,  Paul McVeigh,  say the same thing a few weeks at a masterclass and I don’t doubt it’s a good principle to maintain.

“Writing has to earn its place,” Gareth said and I understood that to mean it has to sell; he hasn’t the luxury of writing words which will not find a home. There’s no need for him to feel concerned, as he read we were caught up in his storytelling, the skillful language and moved and inspired.

Gareth L Powell was a guest speaker at November 2015 Novel Nights. His books are for sale here. www.garethlpowell.co.uk

You can read another review of the same night at Novel Nights here by Chris Harris and my blog about writing events in Bristol here.