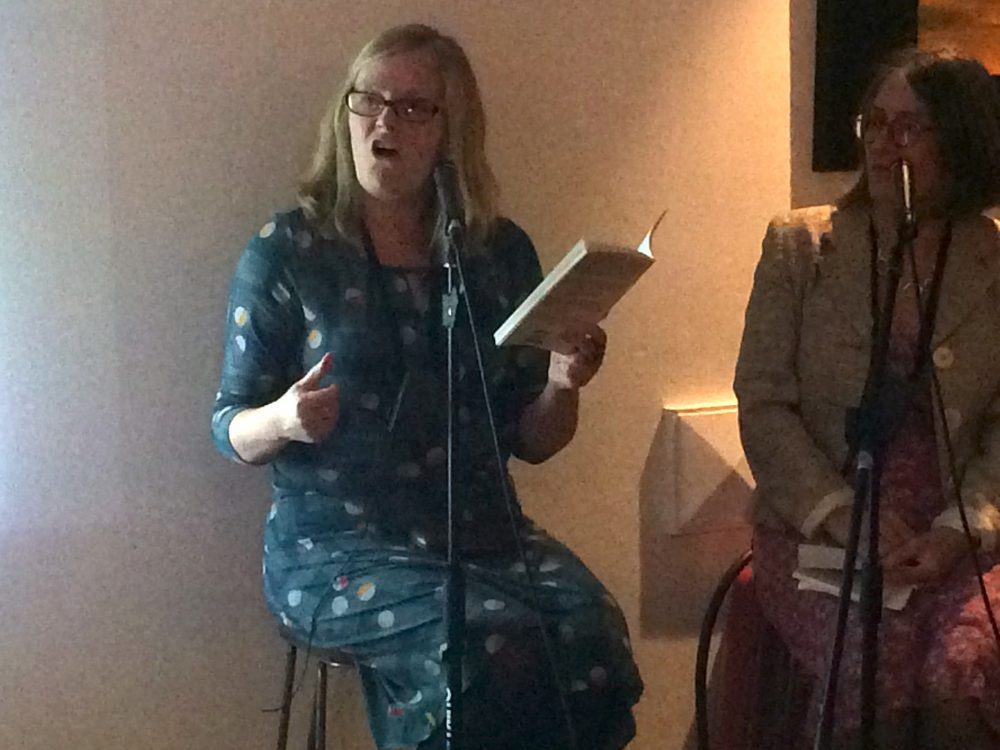 Novels nights celebrated its fifth birthday in a way that it knows best.

We were treated to a night of five very good writers including guest author, Lucy English to talk about poetry and prose.

Lucy English, head of creative writing research centre at Bath Spa University, poet, novelist and lecturer, shared a couple of extracts from her latest project, The Book of Hours. The Book of Hours is an online collection of 48 poetry films. It is poetry set to a film.

These poetry films are set to different times of the day and the year with four films for every month.

I have watched the November afternoon one, “The time and the river” by Maciej Patek. Lucy talked about the films being meditative. I was immersed like one of those illusion pictures.

Lucy described poetry as a painting.

In the film I watched, I saw the lines weave on the screen, it felt like I saw other things that weren’t there. When the writer described the basket and the river, I saw that in the lines on the film.

Lucy advised writers to think about language, whether writing prose or poetry. Good to be fresh and give the written words a voice.

Lucy suggested reading, “How to Be both?” by Ali Smith. It is a good illustration on how different character’s voices can be.

Poetry doesn’t have to be about rhyming. Lucy described trying to write poems that rhymed like squashing a marshmallow in a slot machine. Lucy said she values the sounds of words more.

Lucy said she was inspired by female responses to language and poets on landscapes, mentioning Alice Oswald’s collection, Dart.

If you are interested in viewing poetry films visit The Book of Hours The collection of poems has recently been published by Burning Eye Press 2018.

Other fabulous writers of the night were

She has been longlisted in the Bath novel award and SCBWI undiscovered voices. Nicola read an extract from her latest novel. This started as flash fiction and then turned into a short story and then turned into a novel. It’s about a girl learning to read in 1523. The main character has lost everything in a fire and works an unpaid maid.

Regular door man for Novel nights, took to the stage to read an extract about a dream that the main character had. He followed a Japanese girl, wanted to tell her that he loved her but when he caught up with her he found it was his wife. Simon’s story had great suspense and his language set a visual image as Lucy described.

Is a poet. His latest novel, “Floating harbour” started life a graphic novel but became a novel. He read an extract from “The Dark one”. He described different types of spiders and the main character turning into a spider. He said this isn’t out yet but please make it so. It is like Fear and Loathing meets Spiderman. Very good!

Lives in Oxford and is currently doing a PHD at Bath university. Dairy read an extract from her latest novel “I see through you”. Out now, she described this is a book about obsession. She read an extract about going on holiday to the Alps and the main character having dinner with her boyfriend. She described the man making plans for the rest of the meals and holidays that they would have together. You don’t know what is real or imaginary.

Thank you again to Grace Palmer and the team at Novel nights for the support that you give to all budding writers. Not all areas in the UK have this opportunity to show- case talent. Don’t let the art of writing die.

Happy Christmas all and see you in 2019!